I go to a class called Classical Conversations, and we are learning about artists.  I thought that I would like to share the artist’s story with you. The first artist that we have learned about was named Giotto.

Giotto was born in the year 1266. When he was an older boy he became a shepherd and he enjoyed drawing in his spare time.  Now one day, a traveling artist happened upon some of Giotto’s drawings and was amazed.  He then asked Giotto if he would be his apprentice, Giotto accepted the invitation.  While he was an apprentice he learned how to make paints, paintbrushes and many other art tools.  He also drew more and perfected his skill.  Later on he went off on his own to find a job that he could use his painting skill.  When he was busy painting one of his beautiful pieces of art work and needed more paint or a new paint brush, he couldn’t just go to a store and get it. He had to make it!  He would have to  find and grind materials such as blueberries, insects called cochineal that make a bright red dye, and other natural ingredients. He would then mix it with egg yolk and water.  The paint lasts a long time too!  Remember, if you see a painting done by Giotto, its about 720 years old!  Giotto died in the year 1337 and left a lifetime of paintings behind him.  You can look at some of his paintings at: http://www.giottodibondone.org/the-complete-works.html

To crush the chalk you will need to gather:  A hammer or a rock, chalk, and a hard surface.

2. Then, do the same thing with the other chalk colors that you are using.

There!  That was easy!  Now for the next part!

To mix the paint you need to gather:  Four different containers, the chalk you crushed, a teaspoon, and some water. 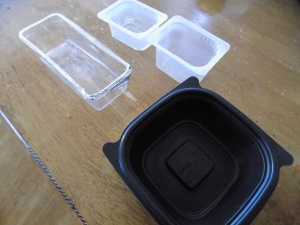 2. Mix two teaspoons of water with the egg yolk, and mix it with one color of chalk.
And do the same thing with all the colors of chalk you crushed. 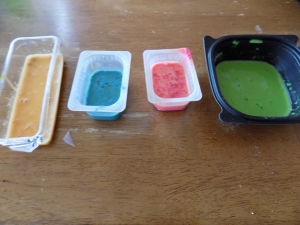 3. Paint a picture with your new paints. 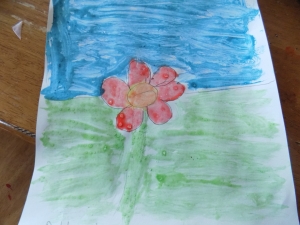 WARNING: Don’t leave your paints out, due to the fact that they have raw egg yolk in them.

I'm a teen girl, and I love writing, all things active, and dancing to music in my room. I especially love to swim and run and am forever grateful for the grace I receive every day from my Savior, Jesus. View all posts by Rachel @ Joyful Creations